Duct stack pressure is the hydrostatic pressure caused by the weight of a column of air located inside or outside a building. It can also occur within a flow element, such as a duct or chimney that has vertical separation between its inlet and outlet. The hydrostatic pressure in the air depends on density and the height of interest above a reference point. 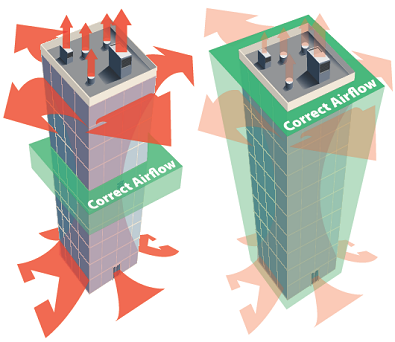 Air density is a function of local barometric pressure, temperature, and humidity ratio. As a result, standard conditions should not be used to calculate the density. For example, a building site at 5000 ft has air density that is about 20% less than if the building were at sea level. An air temperature increase from –20 to 70°F causes a similar air density difference. Combined, these elevation and temperature effects can reduce air density about 45%. Moisture effects on density are generally much less but can be significant if the change in elevation is great (e.g., in a natural draft cooling tower). Saturated air at 105°F has a density about 5% less than that of dry air at the same pressure.

Assuming the air temperature and humidity ratio are constant over the height of interest, the stack pressure decreases linearly as the distance above the reference point increases. For a single column of air, the stack pressure can be calculated as:

For tall buildings or when significant temperature stratification occurs indoors, Equation 1 should be modified to include the density gradient over the height of the building.

Temperature, and thus air density differences between indoors and outdoors cause stack pressure differences that drive airflow's across the building envelope; the stack effect is this buoyancy phenomenon. Sherman (1991) showed that any single-zone building can be treated as an equivalent box from the point of view of stack effect; if there is air leakage, follow the power law as described in the section on Residential Air Leakage. The building is then characterized by an effective stack height and neutral pressure level (NPL) or leakage distribution, as described in the section on Neutral Pressure Level. Once calculated, these parameters can be used in physical, single-zone models to estimate infiltration.

Neglecting vertical density gradients, the stack pressure difference for a horizontal leak at any vertical location is:

By convention, stack pressure differences are positive when the building is pressurized relative to outdoors, which causes flow out of the building. Therefore, absent other driving forces and assuming no stack effect within the flow elements themselves, when indoor air is warmer than outdoors, the base of the building is depressurized and the top is pressurized relative to outdoors; when indoor air is cooler than outdoors, the reverse is true. At some elevation in the building, with such conditions, the pressure indoors is equal to the outdoors: this height is the neutral pressure level.