Pressure drop in pipes is caused by:

To determine the fluid (liquid or gas) pressure drop along a pipe or pipe component, the following calculations, in the following order.

If the Reynolds number < 2320, than you have laminar flow.

Laminar flow is characterized by the gliding of concentric cylindrical layers past one another in orderly fashion. The velocity of the fluid is at its maximum at the pipe axis and decreases sharply to zero at the wall. The pressure drop caused by friction of laminar flow does not depend of the roughness of pipe.

If the Reynolds number > 2320, you have turbulent flow.

The pipe friction coefficient is a dimensionless number. The friction factor for laminar flow condition is a function of Reynolds number only, for turbulent flow it is also a function of the characteristics of the pipe wall.

Determine Pipe friction coefficient at turbulent flow (in the most cases) Colbrook Equation: 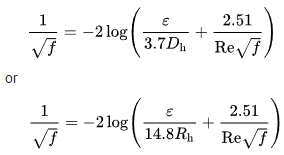 The solutions to this calculation is plotted vs. the Reynolds number to create a Moody Chart.

Pressure drop of gasses and vapor

Compressible fluids expands caused by pressure drops (friction) and the velocity will increase. Therefore is the pressure drop along the pipe not constant.

We set the pipe friction number as a constant and calculate it with the input-data. The temperature, which is used in the equation, is the average of entrance and exit of pipe.