The ISO metric screw threads are the world-wide most commonly used type of general-purpose screw thread. They were one of the first international standards agreed when the International Organization for Standardization was set up in 1947. 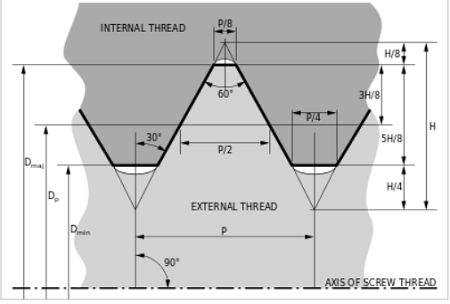 Each thread is characterized by its major diameter, D (Dmaj in the diagram), and its pitch, P. ISO metric threads consist of a symmetric Vshaped thread. In the plane of the thread axis, the flanks of the V have an angle of 60° to each other.

The relationship between the height, H, and the pitch, P, is described by the following equation:

The minor diameter Dmin and effective pitch diameter Dp are derived from the major diameter and pitch as: